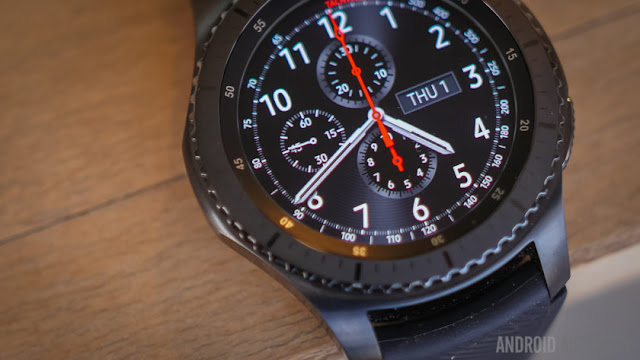 Samsung announced the Value Pack update that brings Tizen 3.0 to the Gear S3 smartwatches. It comes with plenty of new features and more user-friendly widgets. The smartwatches can now control Samsung-enabled IoT devices through Samsung Connect, including the Samsung Gear VR.

Recognized as one of the best-in-class smartwatches in the wearable category, Samsung’s Gear S3 has been praised for its design, user friendliness and technological innovation. But with the recently released value pack update, the Gear S3 is more versatile than ever.

Exercising with the Gear S3 has been completely transformed, thanks to new features designed to make activity tracking more intuitive.*

Advanced, real-time heart rate monitoring with improved accuracy and detailed feedback lets users continuously monitor their heart rate activity – whether they’re enjoying a relaxing yoga session or an exhilarating kickboxing class. They can also control their weight more efficiently via the nutrition management feature, where they can easily add calories consumed, check their calorie balance and compare it to their daily target.

Fitness buffs looking to take their workout routine to the next level will appreciate the Samsung Health Fitness Program feature, which lets them watch exercise programs from their synced smartphone on a TV. Once connected, they can use their Gear S3 to control the displayed content, display their heart rates on the TV.

Centralized Communications, Right from Your Wrist

Despite its productivity and fitness features, the Gear S3 is not just a lifestyle device. In fact, it’s a communicator that makes getting in touch and staying on task easy and efficient.

In addition to searching contacts via the device, users can also now create new contacts right from the screen of the Gear S3. They can also create events along with related information such as date and time, reminder alerts, and location (text only) with a few simple taps and twists of the bezel.


A UX Optimized for the Way You Use Your Device

The Gear S3 sets users free from their phone; a turn of the device’s signature rotating bezel is all it takes to respond to calls, read messages or access an app. But with the latest updates, the device’s UX is even more seamless and user-friendly.

Widgets, for example, have been optimized to fit the newly enhanced circular display of the Gear S3 so that more information can be viewed at a glance. A band has been added around the perimeter of the screen along with widget-specific text such as contact names, detailed weather information and the remaining time before an alarm is set to go off.

Users can also use the bezel to naturally move from a text message notification to the reply input. Should they not have enough time to send a detailed reply, they can make use of even more default quick replies to express themselves in a snap. They can also create and edit their own quick replies directly on the smartwatch.

Gear S3 owners also now have the option to sort apps in the order in which they were most recently used in addition to being able to customize their location. The Moment Bar, which allows users to adjust the volume, check the battery level and more, is easily accessed with a swipe up or down from any screen.

To top things off, Samsung Gear, the app that Gear S3 owners use to sync their smartwatch with their smartphone, has been enhanced with a modern, image-focused design to better harmonize with the classic aesthetic of the device.

With a focus on connectivity, Samsung’s ever-growing connected ecosystem brings about the need for more control. With its large touchscreen and rotating bezel, the Gear S3 is the perfect tool for controlling one’s devices, and is only enhanced with the new value pack update.

Users can now manage their compatible Samsung IoT-enabled devices right from their Gear S3 with Samsung Connect. The smartwatch also functions as a remote control for PowerPoint presentations and Samsung Gear VR, adding an element of convenience to both work and play.

The Gear S3 value pack update is now available for download via the Samsung Gear app.


* To activate these new features, the Samsung Health app must first be updated on the smartphone synced to the Gear S3.
** The Reminder function only works with the Gear S3 if the Reminder app is downloaded on the synced smartphone, which is limited to the Galaxy S8, Galaxy S8+ and Galaxy Note8.