Counterclockwise: Windows on phones evolves but can't fight off Android

Mobile OSes went through a Cambrian explosion and then there was an inevitable mass extinction. The two survivors – Android and iOS – date back to 2007 and they completely dominate the field. Android is on 9 in 10 phones while iOS lives in concentrated pockets around the world.

Probably the last big OS to fall was Windows. We look back to the PocketPC days and Windows Mobile. Back then, the UI tried to imitate the mouse and keyboard-driven desktop Windows and let’s just say that it wasn’t great.

Then there was the Windows Phone whose UI was inspired by the Zune players. This time the influence moved the other way – desktop Windows borrowed from phone Windows. Of course, that was in the misguided “post-PC, tablets are king” era and Microsoft pushed for a touch-friendly UI, even though it didn’t make sense on a mouse and keyboard-operated PC.


Yes, we know that Windows Mobile and Windows Phone don’t have much in common under the hood – or over it. To be fair, “Windows Phone” is barely a thing, Microsoft rebooted it three times, which seriously hurt adoption rates as older devices were left unable to update.

Anyway, Windows may be the last big mobile OS to go extinct (with BlackBerry OS departing for greener pastures a few years before). We don’t think anything will rise up to challenge Android for dominance – and if it does, Google has hedged its bets with Chrome OS and Fuchsia.

So this is a sort of eulogy for Windows on phones. If Qualcomm has its way, there will be some Snapdragon-powered laptops, but Microsoft doesn’t seem keen to wade into the phone business yet again.

Was Windows Phone always doomed to fail? At one point there seemed to be genuine consumer interest in Lumia phones. To make sure we aren't imagining things, let’s look at some cold, hard numbers to find out.

Here's the number of new Windows devices launched each year. We’re including both Windows Mobile and Windows Phone as there was a time when heavily skinned versions of Mobile ruled the land (aka, “The Golden Years of HTC”). 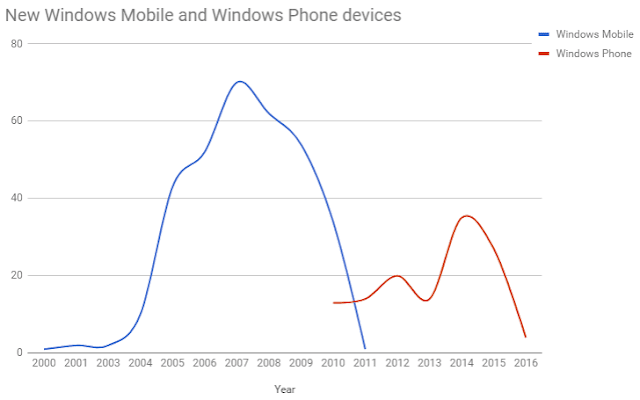 You can practically hear the Burning Platform memo, it sounds like a loud crash as Windows Mobile numbers smash into the ground as makers abandon the platform. There was a push in 2014/2015 but the wind quickly went out of the Windows Phone sails. No second push was attempted
Users quickly warmed up to the new platform, but it seems that there wasn't much loyalty on both sides. Windows Phone 8 was announced in 2012 and it quickly became clear that Windows Phone 7 users will need to buy new devices. You can see in the chart how well that news was received - from 2013 it was all downhill.

Do you think that we’re wrong about Android’s eternal hegemony? Because we have a graveyard with Firefox OS, Tizen, Sailfish and a few others we can turn to for historical data. Sure, they live on in some ways – Firefox now powers featurephones, Tizen is the better non-Apple smartwatch OS, Sailfish wants to create a market for aftermarket OS installs... And yet they are more of a rounding error in smartphone statistics.